I had the opportunity to be a part of this great, short film directed by Randy Kovitz;  produced by my friend, Adrienne Wehr. LIGHTWEIGHT first took flight as a submission in the Steeltown Film Factory screenwriting competition, when the script was chosen as one of ten semi-finalists from a pool of 110 entries.The script sailed past the next hurdle and the next, as the field was narrowed to five and then to three scripts. But Lightweight did not win the final round. (I was also in the film that won, ROLL THE DICE, by HustleBot). The script had struck a chord with many readers and followers of the Steeltown series, and a number of them expressed disappointment at the news. In the weeks following the announcement, the writers’ friends and fellow filmmakers rallied to get the project afloat. I played opposite another fine female actor, Jamie Slavinsky (who you might have seen in my Baierl commercial as the saleswomen), where we were an obnoixous 'Yinzer' couple in Lightweight. So fun.

Check out the trailer:
Lightweight Trailer from Randy Kovitz on Vimeo.

We're not in  the trailer, don't want to ruin the comedy relief, BUT come check out the premiere: 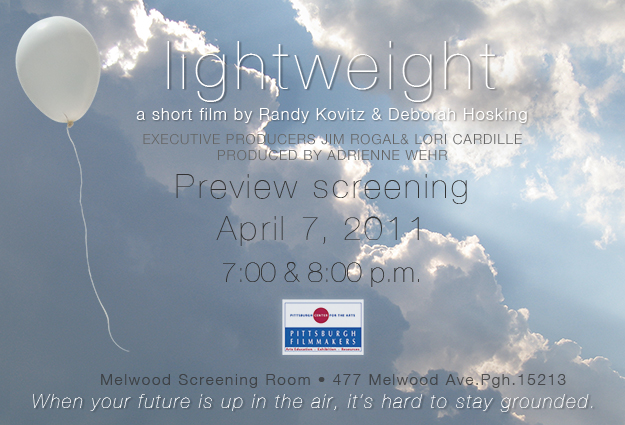