Hey friends - I'm competing as a finalist in the GILDA'S CLUB 'Great Comic Search'.  There are many of my friends that have been affected by Cancer & I would love for some of you to come support an amazing place like Gilda's Club - Here are the details below: 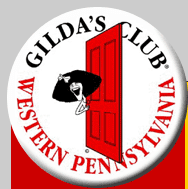 The FINALS show will be held at The Improv @ the Waterfront
THURSDAY, SEPTEMBER 22nd @ 8PM:
LAUGHING IN THE FACE OF CANCER is the culminating event of our annual "Faces of Gilda’s Club" campaign, which began three years ago during Young Adult Cancer Awareness week in April.  The campaign consists of outstanding individuals who commit to raising money and funds for Gilda’s Club throughout a 6-month period between April and September.  All proceeds will be used to fund the Clubhouse located at 2816 Smallman St in the Strip, where a philosophy of "cancer support for the whole family, the whole time" is brought to life by developing programs that support those whose lives are affected by cancer.

100% of the proceeds will go to Gilda's Club of Western PA!